INSAT-3DR is a follow-up of the INSAT-3D that was launched by ISRO on 26 August 2013 to strengthen the observational capability of Indian satellites for the benefit of atmospheric applications leading to a better weather prediction. The launch of INSAT-3DR will provide a continuity in these observations. The INSAT-3DR will be followed-up by its successor INSAT3-DS that will act as the spare for one of these two satellites. The combination of INSAT-3D and INSAT-3DR is expected to provide a high temporal resolution observation that is a crucial requirement for numerical weather prediction especially for nowcasting applications. This will provide a similar capability that exist only with USA with observations from GOES series of satellite at GOES-E and GOES-W locations.

To provide the climate quality data products from the INSAT-3D series of satellites a procedure that is established by the Global Space-based Inter-Calibration System (GSICS) has been adopted by ISRO. Using GSICS procedure the Imager and Sounder radiances are corrected based on the relationship between the collocated simultaneous nadir overpass (SNO) observations from INSAT-3D and Metop-IASI/Aqua-AIRS/NPP-CrIS. The GSICS procedure has proved extremely helpful for the INSAT-3D and will make is consistent with the INSAT-3DR and INSAT-3DS radiances as well based on the inter-calibration coefficient established w.r.t. the reference satellite instrument recommended by the GSICS.

The INSAT-3D/3DR observations together will provide a unique observational capability for nowcasting and short range weather prediction over India due to frequent coverage from two satellites from geostationary platform. Presently, similar observational capabilities are available only over continental US region through GOES series of satellite. GOES maintains two satellites operationally that covers east part of continental US (GOES-East) and west part of the continental US (GOES-West). For nowcasting applications frequent observations, typically half-hourly or better, are required over a region of interest; whereas, for the numerical weather prediction input data at 3 or 6 hourly interval may be sufficient. The data requirement for the rapidly changing weather conditions such as tropical cyclones, thunderstorms, cloud-burst etc the temporal resolution of the satellite data should be very high, < 15 minutes. This can be achieved by suitably configuring/staggering the observations from two INSAT-3D/3DR satellites.

The scan schedule for Imager is every half an hour and the INSAT-3D and INSAT-3DR will be making observations in a staggered mode, separated by 15 minutes. The Sounder observation schedule will be redefined in order to get maximum benefit from two satellites sounding instruments. Presently, INSAT-3D maintains following scan schedules for two regions (Figure shown below): 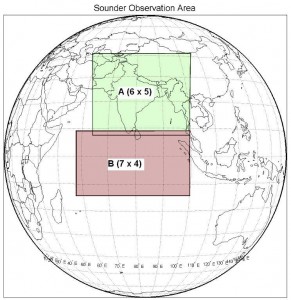