The launch of INSAT-3D satellite on 24 July 2013 heralded a new era for meteorological observations from space-based platforms in India. The INSAT-3D was the first dedicated advanced Indian satellite for meteorological applications with an 18 channel (plus a visible channel for cloud detection during daytime) atmospheric infrared sounder and 6-channel Imager on-board. The INSAT-3D is only second such satellite in world that makes sounding observations from geostationary orbit after USA having an operational series of GOES satellites carrying similar infrared Sounder. The major goal of the INSAT-3D satellite was to boost the Indian observational capability for various weather applications, such as nowcasting of the severe weather events and input to the numerical weather prediction models. The INSAT-3D products are operationally available through the INSAT Meteorological Data Processing System (IMDPS) at MOSDAC, Space Applications Centre, Ahmedabad and India Meteorology Department (IMD), New Delhi. The entire INSAT-3D processing system IMDPS was developed by ISRO. 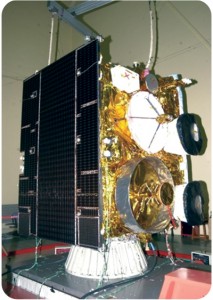 In this series the INSAT-3DR (INSAT-3D Repeat) is the next satellite that will be launched towards the middle of 2016 to enhance the observational capability of INSAT-3D satellite for various weather applications. The INSAT-3DR is exactly similar to its predecessor. A synergistic use of both INSAT-3D and INSAT-3DR together would be very useful for improvement in the existing algorithms of parameter retrieval as well as weather applications. The main instruments onboard INSAT-3DR are the following :