GOES-16 moved to 75.2 degrees west longitude and became NOAA’s operational GOES East satellite on December 18, 2017, replacing GOES-13. From its operational location, GOES-16 is keeping watch over most of North America, including the continental United States and Mexico, as well as Central and South America, the Caribbean, and the Atlantic Ocean to the west coast of Africa. View details of GOES-16’s transition to operations.

Beta: The product is made available to users to gain familiarity with data formats and parameters. The product has been minimally validated and may still contain significant errors and is not optimized for operational use.

Provisional: Product is ready for operational use but has documented known issues. Product analyses are sufficient to communicate product performance to users relative to expectations (performance baseline).

Full: Product is operational. All known product anomalies are resolved and/or documented and shared with the user community.

A Peer Stakeholder – Product Validation Review (PS-PVR) happens for each product at each level of maturity. The PS-PVR appraises the the status of product quality with respect to program definitions.

A schedule of GOES-16 product validation is below. Click to enlarge.

The first public images and from the GOES-16 Advanced Baseline Imager were released on January 23, 2017. See the GOES-16 Data and Imagery gallery for additional GOES-16 imagery and data from all six instruments. Note: The GOES-16 data posted on this page are preliminary, non-operational data and are undergoing on-orbit testing. 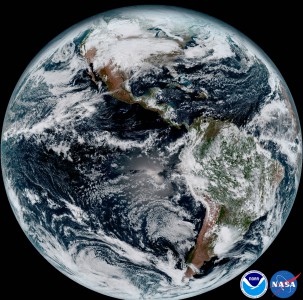 This composite color full-disk visible image is from 1:07 p.m. EDT on January 15, 2017 and was created using several of the 16 spectral channels available on the GOES-16 Advanced Baseline Imager (ABI) instrument. The image shows North and South America and the surrounding oceans.

This area of Mexico and Central America is seen from GOES-16 with a largely cloud-free view. A fire and its associated smoke are evident over southern Mexico near the coast.