IASI-NG (onboard Metop-SG A) is a passive infrared sounder which scans across the track in a step and scare mode, with each scan cycle consisting of 14 earth views, one cold space view and one black body view. The duration of a scan cycle is 15.6 seconds and the swath width is 2000 km.

The scan pattern is such that on either side of the nadir, seven earth views or Field of Regards (FOR) are placed symmetrically. The instrument scans left to right according to in-flight direction (Sunward).

Each FOR contains 4×4 fields of view (FOV), which implies 14 X 16 FOVS per scan line. Each FOV has a 12 km ground resolution corresponding to a satellite altitude range of 823–848 km (dependent on latitudes).

MWS (onboard Metop-SG A) is a total power radiometer which collects the radiation coming from the Earth using a scanning flat mirror (rotating reflector) which reflects the energy to the feed-horn assembly through a static parabolic reflector. The rotation of the mirror around an axis which is nearly parallel to the flight direction of the orbiter, results in the cross-track sensing of the instrument. The Earth is viewed at different scanning angles, symmetric around the nadir direction.

The scan speed is constant during the Earth view, providing equally spaced measurements in viewing angle. With a scan duration of 2.254 seconds, and an angular sampling amounting to 1.04919°, there are 95 earth view pixels per scan, resulting in a maximum scanning angle of 49.31° and a swatch width of about 2210 km in mid-latitude regions.

METimage (onboard Metop-SG A) is a multi-spectral (visible and IR) imaging passive radiometer that records 24 image lines simultaneously during each scan across-track with a swath width of ±54 degrees. By proper selection of rotation frequency, the scanner produces a gap-free scan pattern on ground. Output is an image sampled at discrete locations. The sampling within each line is performed at constant scan angle increments.

METimage has an across track swath of ~2670 km, corresponding to a scan angle of ±53deg, with a constant spatial sampling angle across the swath and a spatial resolution of 500 m at nadir. The scan period of 1.729 s is defined by the satellite orbit (sun synchronous, average altitude of 830 km) and the spatial resolution.

The measuring concept of 3MI is similar to that of POLDER. The multi-viewing capability will be achieved by acquiring 2D images of the same target on Earth, using the same spectral channel at 14 different angles at regular points along the along-track acquisition points. At every along-track acquisition point, a full set of spectral and polarisation images are recorded by a rotating filter wheel. 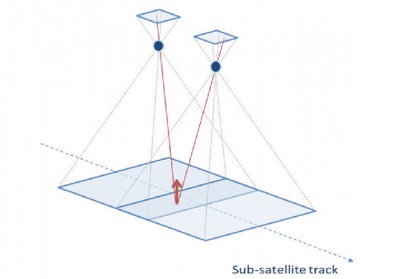 At nadir, the 3MI SSD is better than 4 km square (along-track x across-track) over the full EPS-SG orbit. This compares with approximately 6 km of POLDER3 on the PARASOL orbit. Furthermore, 3MI features a minimum swath of 2200 km over the EPS-SG orbit. This compares with the 1366 km of the POLDER3/PARASOL instrument, thus 3MI on board EPS-SG provides better coverage.

The first three components of the Stokes vector of the reflected light (I, Q, and U) will be measured at nine channels (see the table above) in the spectral range from 410 to 2130 nm for up to 14 observation directions. The multi-polarisation (three acquisitions within one second for the polarised channel) and multi-spectral acquisitions, are done within a wheel rotation of less than seven seconds. The observation in one direction takes 21 seconds (three rotations of a wheel with the duration of seven seconds) and it is requires about five minutes to observe the same ground scene from 14 directions.

The Sentinel-5 mission comprises an Ultraviolet Visible Near-infrared Shortwave (UVNS) spectrometer and data from the Infrared Atmospheric Sounding Interferometer (IASI-NG), the Visible Infrared Imager (METImage) and the Multi-viewing Multi-channel Multi-polarisation Imager (3MI), all onboard Metop-SG A.

The UVNS will provide hyper-spectral soundings with a spectral resolution from 0.065–1 nm in the wavelength range from 0.27–2.4385 µm, at a spatial sampling of 7 km for channels above 0.3 µm.

The ICI instrument is a conically scanning millimetre/sub-millimetre wave radiometer which collects radiation coming from the Earth by means of a rotating antenna, composed by an offset parabolic reflector and a feed-horns cluster rotating together. The rotation of the slanted antenna allows the conical scan to be performed. 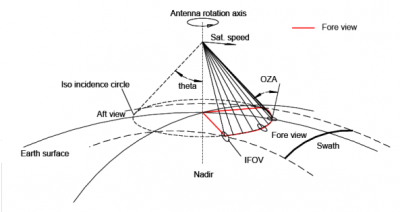 The ICI shall provide measurements over a conical scan with an observation zenith angle of 53° ±2°. ICI scans in a clockwise rotation when viewed from the nadir side of the platform, where it is located.

The observations are acquired within an angle of ±65° in azimuth for the fore view, equivalent to a swath of about 1700 km at nominal orbit altitude of 817 km.

The Microwave Imager (MWI) is a conically scanning radiometer that collects radiation coming from the Earth by means of a rotating offset parabolic reflector antenna and feed-horn cluster rotating together. The rotation of the slanted antennas allows conical scans with constant incidence angles of about 53°, depending on the channel frequency.

The observations are acquired within an angle of ± 65° in azimuth for the fore view, equivalent to a swath of about 1700 km from the altitude of the nominal orbit. MWI has a moderate antenna size providing on ground footprints ranging from 50 km down to 10 km, depending on frequency.

The scatterometer is a real aperture, side-looking radar, emitting microwave radiation towards the Earth’s surface and measuring the energy scattered back.

With a carrier frequency of 5.355 GHz (C band), it will provide a breakthrough, compared to ASCAT, by delivering information at a doubled horizontal resolution, a widened swath width of 2 × 660 km, and the addition of cross-polarisation measurements. The doubled horizontal resolution will provide oceanic wind vectors closer to the coast lines, further enhancing spatial coverage beyond the increased swath width. The cross-polarisation supports measurements at higher wind speeds without saturation, for the benefit of observing tropical and extra-tropical storms.

The Radio Occultation (RO) instrument is a passive instrument measuring the time variation of the excess path length of Global Navigation Satellite System (GNSS) signals as they are occulted by the atmosphere.